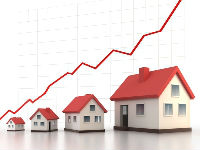 There can be no great surprise that the figures for residential property prices released by the Central Statistics Offices show further increases across the country.

Whilst prices are still some way off their peak of February 2007 this continuing trend is a cause for concern.  The current increases are not being driven by an excess of credit in the market place but by a continuing lack of supply.  The supply shortage is particularly acute in Dublin where there is a lack of family homes.

Until this shortage is addressed we are likely to see prices rises continue.  This year only 10,000 homes will be completed nationally with 2,000 of these in Dublin.  The ESRI estimates that each year 8,000 new households are formed in Dublin, with 25,000 new homes needed nationally.  Therefore we are nowhere near meeting the housing needs of our growing population.

The price rises also throw up another difficulty, the Central Bank is currently consulting on a proposal that all new mortgages have a maximum loan to value of 80%.  This means that buyers need to have a minimum deposit of 20%.  As each month goes by that 20% grows greater.  The Central Bank is also proposing the lending ratios be caped at 3.5 times a persons earnings.  As property prices rise at the current rates more and more people will be pushed out of home ownership.  Salaries are not keeping pace with house price rises as we come out of the downturn.

So what is the solution, how can we stem such price rises?  Bring more homes to the market would seem to be the only answer to the problem.  That means building homes, the right kinds of homes in the right areas to meet the demands of the market.  However to do so, there are still barriers to overcome.

Capital for building projects is still difficult to access.  Banks are only willing to lend a maximum of 60% of any project cost.  Therefore the final 40% must be found from other sources.  This is often difficult and costly adding to the final cost of the finished homes.

Planning permissions exist in some local authority areas for developments that were green lighted during the boom.  However many of these are no longer what the market requires, for example large quantities of apartments in North County Dublin will not sell.  A mechanism needs to be found to allow existing permissions be sensitively altered to reflect current market demand for family homes.

Development levies can also be a problem.  Some local authorities have still pegged their development levies at boom time rates.  This adds significantly to the overall costs of a project, the final cost of homes and mortgage costs to the end buyers.  These need to be brought into line with current economic realities.

If these issues were meaningfully tackled, house building could start again in realistic numbers. Until then we are likely to see increasingly large double digit house price rises.