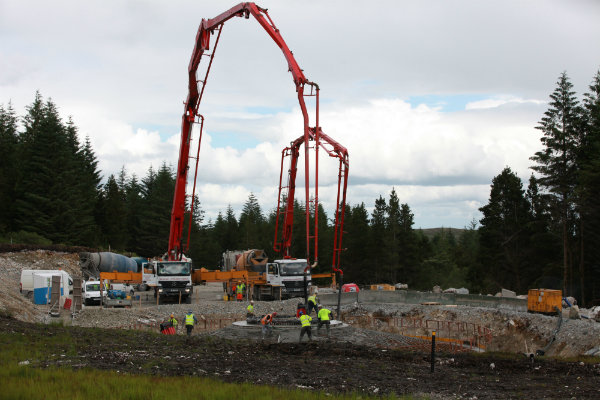 This week’s Featured Project comes from Limerick based company, Roadbridge Civil Engineering & Building Contractor who were appointed as the Project Supervisor Construction Stage and Main Contractor on the Galway Wind Farm in November 2014.

Galway Wind Park (GWP) is situated in Uggool, Oughterard and is a wind farm cluster that consists of a total of up to 69 wind turbines with an energy output capacity of 169MW. When completed, it will be the largest onshore wind farm in Ireland. GWP will produce enough green energy to power approximately 84,000 homes, which is equivalent to almost 90% of the homes in County Galway.

The green energy produced at GWP will help to offset approximately 190,000 tonnes of CO₂ emissions every year from fossil fuel generation.

Phase 1 of the project (24 permitted turbines) entered construction in February 2015 and is owned and financed by SSE. Phase 2 (45 permitted turbines) is a 50/50 joint venture between SSE and Coillte, Ireland’s largest forestry and land solutions company.

The works include excavation and construction of hardstands and bases for the 69 wind turbines, construction of 2 new sub-stations and a new operations building, installation of 530km of electrical cabling and the construction and upgrade of new and existing roads of around 50km.

Galway Wind Park is expected to complete in 2017.