in News in Pages in Events in Reports in Services in Webinars in Downloads in Associations
Home / News / Construction industry can potentially generate 112,000 jobs by 2020 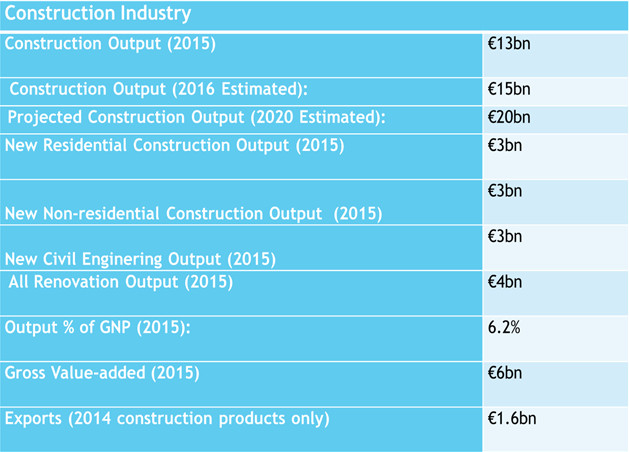 A new report by DKM shows that industry can grow on average by 9% per year up to 2020 but warns of potential skills shortages.

A report, commissioned by the Construction Industry Federation and carried out by DKM consultants in conjunction with SOLAS, states that construction activity could potentially generate a requirement for 112,000 jobs up to 2020.

Director General of the CIF, Tom Parlon stated at a launch in Construction House today,

“Over the next 3 years, this report estimates that we will need 112,000 additional workers in construction to deliver on the ambitious targets set out in the Government’s €43billion Capital Programme, the Rebuilding Ireland Strategy and in meeting the increasing demand from Foreign Direct Investment companies for specialist buildings.

The potential prize for delivering on these strategies is huge in terms of economic growth, jobs and recovery in the regions. With a forecast of 9% annual growth on average the construction can become a €20billion industry by 2020. It can potentially employ 213,000 direct employees making it the largest generator of jobs in all communities around the economy. It is forecast to contribute around 10% of GNP to the Irish economy.

The construction industry is generally in recovery since 2013 but it is still grappling with nearly a decade of underinvestment and is playing catch up with an economy that has expanded strongly in the meantime. This has manifest itself in the acute housing supply shortage and infrastructure deficits across the country.

This report sets out the required number of employees and apprentices to sustain desired activity levels as set down by Government policy. We will continue to work with the Government and its agencies such as SOLAS and the Education and Training Boards to deliver skilled employees and apprentices through innovative initiatives. Critical will be getting the message to young people and those who have emigrated that there is a significant number of quality careers across all the trades and functions in construction companies.

In 2015 the value of turnover in the construction industry was around €13 billion, representing 6.2 per cent of economic activity (GNP), down from almost one-quarter of the economy at the height of the last boom. There were 136,900 persons directly employed in Q2 2016, 6.8 per cent of the total employed workforce.

The severity of the construction recession saw the numbers working in construction decline by almost 180,000 by Q1 2013 to just 35 per cent of the numbers employed at the peak (2007). Construction recorded the fastest rate of employment growth in the period since, gaining 39,200 jobs at a rate of around 1,000 per month.

The industry is concerned that as activity ramps up quickly there will be a lag in the necessary skilled workers in the labour market and amongst those coming out of full-time education and training to meet the demand over the medium-term.”

“The construction industry will be an engine for growth and job creation over the decade. Construction companies are delivering high quality projects domestically and internationally and have never offered better opportunities for people to work and build careers.

We as an industry are focussing on dramatically increasing the number of apprentices in the industry. There were only 4,400 apprentices across all trades in construction in 2015 compared with 23,700 apprentices in Q4 2007. This year so far there were around 1,500 new registrations and this report indicates that we need to reach an annual level of registrations of around 4,000 to sustain forecast activity.

We are seeking to establish a Construction Skills Forum involving relevant state agencies and Departments to monitor skills demand and to deliver initiatives to ensure there is an adequate supply of labour to deliver Ireland’s infrastructure, housing and built environment requirements.”

Please find a link to the report here

­       – When the gross value added (GVA) of the industry is measured – its contribution in terms of the wages and profits earned by building workers and construction companies – the construction GVA was valued at €6 billion or 3 per cent of GNP in 2015, compared with less than 2 per cent at the height of the recession and 11 per cent of GNP at the peak.

– Although the scenario presented is subject to a number of downside risks, including uncertainty over Brexit, there is a substantial volume of work planned by the commercial and industrial sectors in response to the economic recovery and the growth in population. There is also considerable pent-up demand for housing which, if delivered, could see the level of housebuilding by 2020 returning to more normal levels. The industry is in recovery phase and is on course to experience the most positive outlook for construction in a decade, provided it has the skills available to meet the demands on the industry.

­       – There were 63,800 qualified skilled craftspersons with construction-related skills in the whole economy in 2015.

­       – There were around 46,000 self-employed persons in the construction industry in 2015, which corresponds to 36 per cent of the total number working in the industry.

­       – Based on the construction output scenario presented in this report, it would seem sensible to plan for an industry that will provide direct employment for around 213,000 persons by 2020, compared with 136,900 in Q2 2016. This amounts to an additional 76,000 jobs over the next four years, and would return direct employment in the sector to Q4 2008 levels.

­       – The cumulative labour replacement demand in the period 2016-2020 is estimated at almost 36,000 construction workers, which is significant in the context of the total expansion demand by 2020. Based on expansion and replacement demand, the total labour requirement over the next four years is around 112,000 workers. 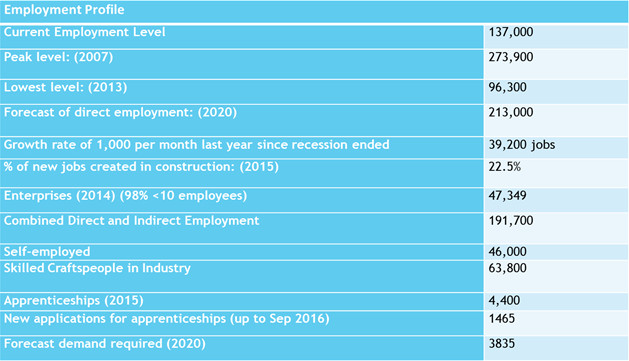