in News in Pages in Events in Reports in Services in Webinars in Downloads in Associations
Home / News / Project Feature: Ireland’s First Permanent Container Home 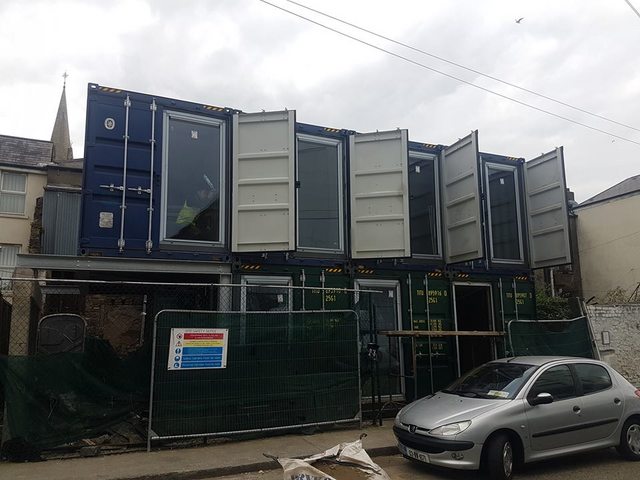 Late last summer Buildstruct, a modern building company with a passion for innovation and creative thinking, was approached to work on its most challenging project to date- a permanent home, made from shipping containers.

Less than eight months later, the project in Dublin’s Ringsend, which will be the first ever permanent structure of its kind in Ireland, is nearing completion.

“We were initially supposed to construct phase one, which consisted of three containers, including the ground floor and all of the associated ground works,” JP McGann of Buildstruct explains. “Then this changed to including the first floor when the client saw the first containers being installed and obviously this changed our schedule, but we were happy to accommodate them as we wanted to see the project closer to completion ourselves.”

However, the project has, by its very nature, presented Buildstruct with a number of challenges along the way.

“It is the first time a project like this has been undertaken in Ireland and certainly we have never worked on anything like this before,” JP explains. “We were really lucky that the design team were so detailed with their drawings. However, everything had to be meticulously thought out as you don’t get a second chance with steel.”

“Knowing what I know now,” JP adds. “I would do things a lot differently, a lot more work offsite in particular. The best thing about this project, besides being involved in something unique to Ireland and gaining great experience, was finding out first-hand that alternative methods of construction really do exist and really do work because I was a traditionalist and a critic before I undertook this project.”

This Ringsend based container project, is BCAR certified two storey build on a 72 square metre site, which will result in 158 square metre home.

So does JP think are container builds will become more common in Ireland over the next few years?

“I don’t see why not,” JP says. “For tight restrictive site it is a no brainer. Cost-wise it is also very reasonable, when you compare it to the cost of other building methods that are available for restrictive site construction.”