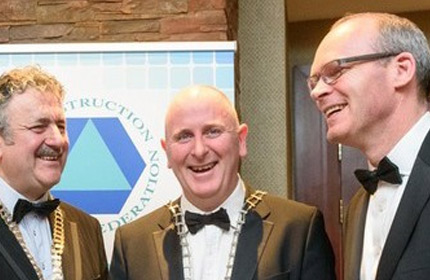 Minister Simon Coveney has reaffirmed his commitment to see the Construction Industry Register Ireland put on a statutory footing in the coming months.

Speaking at the CIF Cork Construction Annual Dinner last Friday, the Minister for Housing, Planning Community and Local Government, said that he expected legislation to introduce a mandatory register to be placed before the cabinet within weeks.

“I am committed to bringing a Memorandum for the Government to Cabinet shortly seeking approval to publish the General Scheme of a Building Control (Construction Industry Register Ireland) Bill and permission to commence drafting,” Minister Coveney said. “The purpose of the draft Bill will be to place the current voluntary Construction Industry Register Ireland on a statutory footing and thereby provide in law for the registration of builders, contractors and specialist sub-contractors. This is seen as an additional essential consumer protection measure giving consumers who engage a registered builder the assurance that they are dealing with a competent and compliant operator.”

“I see CIRI as an important and necessary step in restoring public confidence and trust in the Construction Sector given the legacy of the building failures that came in the wake of the construction-related economic collapse. It is an essential consumer protection measure that will give consumers who engage a registered builder the assurance that they are dealing with a competent and compliant operator.”

“With GDP continuing to grow at over 3% per annum and with over two million people in employment, as unemployment has already fallen below 7%, there is now every reason to be confident about the prospects for the economy and for the Construction Sector,” Minister Coveney added.

The Minister’s words were warmly welcomed by the CIF President, Dominic Doheny, Cork Branch Chairman, Cormac Smith, and other attendees at the event held in the Fota Island Resort Hotel, Cork.

CIF President, Dominic Doheny, who also spoke at the event, stressed the need for greater interaction between the Government and the CIF in relation to the provision of infrastructure and the reactivation of the Construction Sector Group to chart and implement an ambitious growth strategy for the construction industry up to 2030.

“We are overwhelmed with the attendance tonight and the support of the membership of the Branch. It simply would not have been possible to hold this event without the sponsorship received from Dan Twomey of Cork Builders Providers and the support of all the members; within two weeks of notifying members of the event, it had sold out and that has been thanks to our Organising Committee; Chairman Cormac Smith, Vice Chairman Brian Nolan, Sean Carrigy, Mark Dilloughery, Stephen McCarthy and CIF Staff, Ronan O’Brien and Bríd Cody.”

Over 300 people from all sectors of the construction industry attended the CIF Cork Construction Annual Dinner.

Over €5,000 was raised on the night for Cork ARC, a cancer support service in Cork.

“It was only appropriate since the event was held on daffodil day that we would try and contribute to the excellent work of Cork ARC,” Chairman Cormac Smith who organised the fundraising on the night said. “Everyone in Ireland has been affected in some way by cancer and it was good for us to give something back to organisations like Cork ARC that have helped many individuals and families.”