in News in Pages in Events in Reports in Services in Webinars in Downloads in Associations
Home / News / CIF Project Feature: Techrete expands its UK operations with Brigg facility works

From its foundation Techrete Ltd. has been at the forefront in the promotion and use of architectural precast concrete.

Established in Ireland in 1985, Techrete has steadily expanded over the years. In 1995 Techrete acquired a UK manufacturing base at Brigg in North Lincolnshire, followed in 1999 by a new drawing office in Enderby, near Leicester.

Since acquiring Brigg, the facility has been steadily modernised and expanded to suit the changing architectural precast concrete market. Now, in a move which clearly demonstrates the company’s confidence in the future, production capacity at Brigg is being increased further, with a £5 million extension that adds 3000m2 of fully enclosed factory space along with improvements to the current facility. 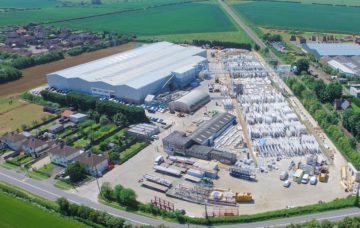 “The extension to our production facility in Brigg, clearly demonstrates our ongoing commitment to service our customers’ needs with the highest quality product and innovations in architectural precast cladding whilst constantly striving to minimise our environmental footprint,” said Techrete Managing Director Liam Aylward.

The changes will build on the computer-controlled carousel system, where casting tables can move in three dimensions around the factory and into curing chambers. The expansion also allows for greater production capacity to meet a rising turnover and a temperature-controlled environment for a greater quality product.

“As freshly cast concrete can be affected by any changes in temperature and humidity that it is exposed to in its early days, the aim is to have all the production and finishing processes under cover,” Techrete Managing Director Liam Aylward explained. “The company does this by keeping all panel manufacture in the temperature-controlled factory until the panels have completed their initial curing period and have been finished ready to go to site where they can be transported to the holding yard.”

Techrete’s newly developed industrial insulated sandwich panel has also been incorporated into the extension, with the 10m-high walls of the new production space formed from stack-bonded, load-bearing precast sandwich panels with a lightly exposed aggregate finish on the external face of the outer panel. And as the outer leaf of the 2m-high panels is only 80mm thick in an overall thickness of 240mm and there is no requirement for a secondary structure between columns.

A key feature of the new plant is the extended and improved carousel system that enables steel moulds to be conveyed to zones of specialisation during the manufacturing process, with all curing and finishing contained within the new building. 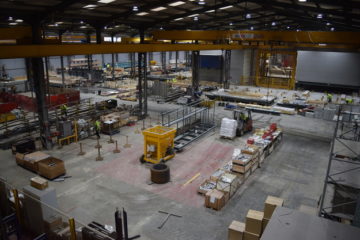 Having had great success with a robotic concrete placing system and an automated panel-handling system to move panels to the yard in its Balbriggan factory, the company has now installed these state-of-the-art systems at Brigg.

“Techrete is leading the way in the design, manufacture, delivery and installation of the quality-controlled architectural precast concrete panels that are being increasingly demanded by clients and architects alike,” Techrete’s Liam Aylward added.

The new extension and updating further enhances Techrete’s drive to be as sustainable as possible. While the company manages itself and the supply chain through EN ISO 14001 for the Environment and EN ISO 50001 for Energy, the introduction of a rainwater harvesting system will make its panel production almost 100% self-sufficient when it comes to water usage.

In addition, a 250kW photovoltaic array will provide a considerable proportion of the factory’s daytime electricity demand, which means that eventually all panels will be manufactured using sustainably.
To cut down the disposal of old materials and minimise the consumption of new in building the new extension, precast wall panels from the old building were also incorporated, demonstrating how robust the panels and also reducing the CO2 and landfill waste for the project.

For more information check out: www.techrete.ie