in News in Pages in Events in Reports in Services in Webinars in Downloads in Associations
Home / News / CIS Blog: Over €3.5 Billion Worth of Construction Projects Went On-Site in H1 2017 (ex. Self build) 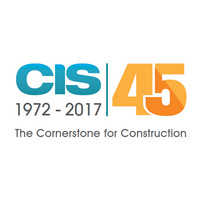 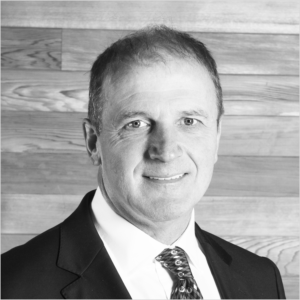 Construction Information Services (CIS) have just published their Q2 2017 Construction Market Review which provides a comparative analysis of the construction sector to date in 2017, measured against the corresponding period of 2016. It provides an insight into future planning pipelines from regional and sectoral perspectives.

Despite the many challenges facing Ireland and the EU, there is a case for cautious optimism on the strength of the current construction statistics laid out in CIS Q2 2017 Construction Market Review. Although the exponential growth in the commercial sector is tapering off, there is a renewed confidence in the sector due to the commitments of major financial institutions like JP Morgan establishing in Dublin along with Bank of America’s planned expansion, proving that Ireland could be lining up to take advantage of the Brexit fallout.

All other sectors are growing with the best performing sector in the analysis being Community & Sport which is up 79% on the same period last year (2017 – €445m versus 2016 – €78m). This increase is attributed to two major developments commencing construction – the Curragh Race Course redevelopment and the new Centre Parcs Holiday Village in Longford.

Looking at the regional analysis in project value terms for H1 2017 versus the same period in 2016, Leinster is down by €250m, however, the number of projects commencing On-site increased by 35. Ulster (ROI) is down both in value and volume – €75m and 4 projects respectively. 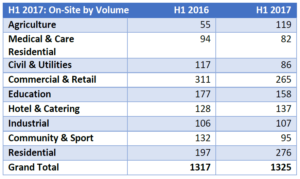 The market share based on the volume of projects commencing construction is Munster 28%, Co. Dublin 27%, Leinster 24%, Connaught 13% and Ulster (ROI) 8%.

Agricultural projects have seen the largest decrease in volume with only 694 projects granted planning. Residential (excluding Self-build) recorded an increase in permissions by 48 projects over H1 2016, which amounts to 8,193 units. 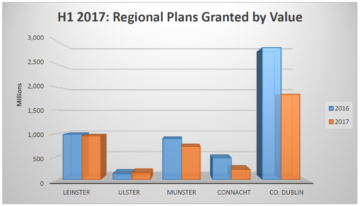 The value of projects granted permission in the period under review, reveals a dramatic drop on the corresponding period in 2016. There is a €1,447m decrease, the majority of which is attributed to two sectors – Medical & Care Residential and Commercial & Retail.  On further analysis of these two sectors the €650m Children’s Hospital accounts for 90% of the decrease in values in the Medical & Care Residential,

In the Commercial & Retail sector the decrease is made up of a large number of projects in value ranges from €10m to €80m which were granted permission in H1 2016. It will not be surprising that the majority of these were in Dublin and mainly for offices, with the exception of three developments, two in Cork and one in Limerick.

Munster shows the biggest decrease in volumes in H1 2017 compared to 2016 at 208 projects, which represents €168m in value terms. Connaught had 67 less projects granted permission and these represented €253m in construction values. However, in Co. Dublin while the decrease was only 18 projects, the value was in excess of €1billion, which is mainly accounted for by the €650m National Children’s Hospital (currently at Contract Awarded), €300m expansion of the Water Treatment Plant in Ringsend (currently at Tender stage) and a €100m Office development at Hanover Quay (currently On-site).

The volume of projects submitted for planning permission increased slightly in H1 2017 to 3,537 over the comparable period in 2016. This is a positive reflection given CIS recorded a small decrease in Q1 2017 versus Q1 2016.

In terms of construction values there was a €35m decrease in H1 2017 versus H1 in 2016. The Residential sector (excluding Self-build) represented the largest increase in both values and volume. The value of plans submitted amounted to €1.7 billion, which represents 13,199 units, which is an average of 21 units per development. The Hotel & Catering continues its positive momentum with an increase of €205m over H1 2016 or 67 developments. Industrial also recorded increases in both volume and value – 11 projects and €140m respectively. The biggest decrease in value terms was in Civil & Utilities at €443m and when analysed projects such as the €200m Vartry Water Treatment Plant in Co. Wicklow, the €160m Waste to Energy Facility in Co. Cork and the numerous Solar Farms in Co. Wexford all submitted for planning in H1 2016 go towards explaining the decrease.

An analysis of the plans submitted by Region in volume terms reveals the continuing trend of activity  increases in Leinster and Co. Dublin, with Connaught (-94), Munster (-45) and Ulster (-9) recording decreases over the same period last year. However, in terms of values the outcome is static, which suggests that in Connaught, Munster and Ulster (ROI) the individual developments are of a higher value versus the comparable period in 2016.

*’On-Site’ describes any projects where building activity has begun.

**The Leinster region excludes Dublin throughout this report. Dublin is treated as a region in its own right due to its large ‘closed’ economy and high levels of internal construction activity.

***This report excludes one-off housing and extensions and any projects where no construction opportunity exists such as Fire and Disability Access Certs. Any discussion of construction projects in this review incorporates this caveat.