in News in Pages in Events in Reports in Services in Webinars in Downloads in Associations
Home / News / Project Feature: From the ESB Archives: Constructing the Shannon Scheme

Project Feature: From the ESB Archives: Constructing the Shannon Scheme 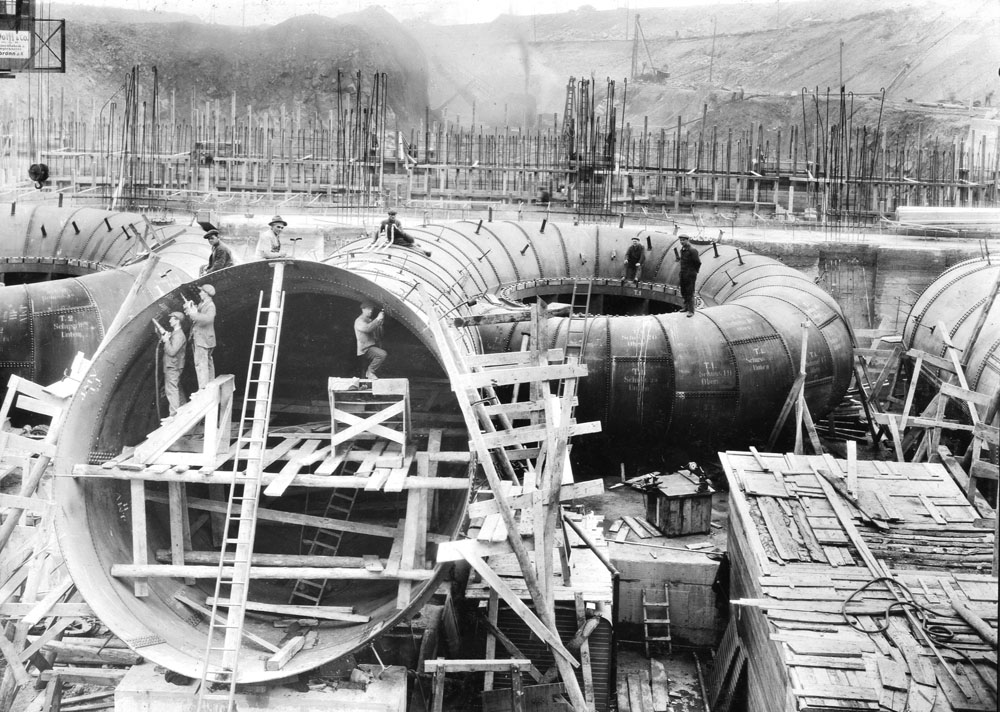 Dr Kirsten Mulrennan, Archivist with ESB Archives explains the impact of one of Ireland’s greatest projects – the construction of the Ardnacrusha power station, which began in 1925.

Before the foundation of ESB 90 years ago, just over 40,000 Irish homes had electricity, supplied either by a local authority or private company. Supply was limited and unstandardised, and the country had the second lowest consumption of electricity in Europe. While the River Shannon had long been the focus of various plans to bring electricity to Ireland, early iterations of the project were deemed unfeasible and were ultimately delayed by political unrest in Ireland and abroad. In 1923, Dr Thomas McLaughlin, a young engineer from Drogheda, returned to Ireland after a period working abroad with Siemens in Berlin and studying hydroelectric schemes in Europe. Together with Siemens and Patrick McGilligan TD, Minister for Industry and Commerce, McLaughlin set about acquiring government approval for a new scheme that would harness the River Shannon to supply the larger towns and cities of Ireland, a project considered vital for the self-sufficiency and modernisation of the county. While the Shannon Scheme was a mammoth undertaking for a small country just emerging from civil war – costing one-fifth of the national budget – government approval was secured and construction began in late 1925.

The history of the scheme is well-documented throughout the records at ESB Archives, including extensive photographic, advertising and audiovisual collections. A series of 39 progress reports published by Siemens between 1926–1929 – now freely available to the public at esbarchives.ie – offer unparalleled insight into the.scheme’s construction, including the design of Ardnacrusha power station and the Parteen Weir, the assembly of each component from turbines to transmission lines, as well as a glimpse into the staff encampments onsite and an exploration of the use of materials such as concrete and timber. The reports also capture the lesser-known idiosyncrasies of the project, for instance, that dynamite stores at Ardnacrusha were kept underground, ‘surrounded by earth banks and barbed wire and … under constant military supervision’ (March 1928), and that the integrity of the newly-constructed Blackwater bridge at was tested by a ‘17 ton roller’ before being opened to traffic (October 1927).

The construction of the project was efficient and thorough: a special laboratory was established onsite to test the crushing strength of the concrete used (November 1927); models were constructed and tested at the Hydraulic Laboratory in the Technical High School in Berlin to find the best design for the Parteen Weir (April 1928); and a stone crushing and washing plant was built to reuse limestone excavated onsite as building material (May 1927). The February 1929 report outlines how, in order to meet project deadlines and ‘costs reasonable for a first class work’, special gangs of workers were trained to build specific sections of the scheme, namely ‘Foundations, Steel Work Erection, Blockmaking, Wallbuilding, Roofing, Plastering, Flooring and Painting’. Using this method, a team could complete three to five substations every four weeks.

The sheer scale of the project is clearly evident in the final report, published in December 1929: over the course of the project, 7.5 million m3 of earth and 1.2 million m3 of rock were excavated, 65,000 tons of cement and 700 tons of ammunition were used, and various types of machinery were employed, including 130 steam locomotives, 1,770 wagons and seven tower cranes. Siemens note that ‘a tremendous amount of secondary though important work had to be carried out as well … roads were built, telephone and electric lines stretched, 100 km of temporary railway lines laid …’ The number of workers employed further speaks to the magnitude of the project, from engineers to labourers, clerks to carpenters – ‘over 2500 workmen were employed in the average, though the maximum reached was about 4300’.

By the time the scheme opened in July 1929, life in Ireland was changed utterly. The Shannon Scheme was the biggest engineering project in Europe at that time, and the first national integrated electricity system in the world. It led to the establishment of ESB in August 1927 to manage the generation, transmission, distribution, marketing and sale of energy supply to one third of the Irish population, and paved the way for the connection of the remaining two-thirds during the roll out of the Rural Electrification Scheme from the 1940s. These reports are an invaluable archival resource, a snapshot of a four-year period of intense construction that would have a direct impact on the rapid social, economic and industrial development of Ireland in the first half of the twentieth century.

Dr Kirsten Mulrennan, Archivist, ESB Archives. For further information, visit esbarchives.ie, email [email protected], follow us on twitter @ESBArchives, phone + 353 1 6042146, or search our interactive map of Ireland to see when your area was connected to the national network.