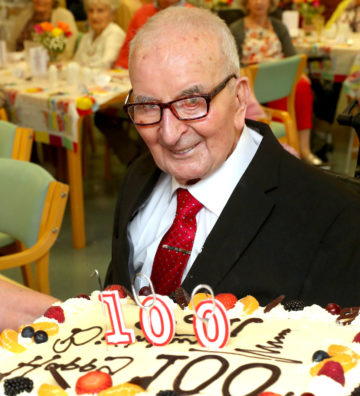 Mr. Fogarty was honoured for his outstanding contribution to the construction industry and his beloved trade of carpentry, throughout the last century.

Dominic Doheny, CIF President presented Mr. Fogarty with a copy of Photographer Michael Durand’s The Nurses’ Home, a photographic documentary of the Mater College of Nursing, which was built in 1954. Mr. Fogarty remembers his time working on the project very fondly.

“It was one of the finest buildings in the city at the time,” Mr. Fogarty said. “It had the best of materials and workmanship.”

Mr. Fogarty was delighted to reach his hundredth birthday and very much enjoyed planning his centenary celebration. “I never thought I’d see this age “he said. “I saw a lot of changes over my lifetime.” 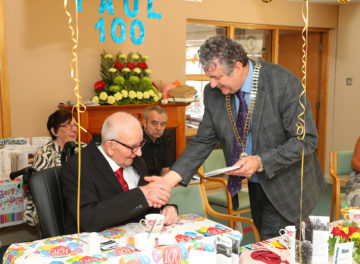 Mr. Fogarty was born on a small farm in Ballybrophy Co. Laois in 1918, the second eldest of five children. His aunt and uncle owned a grocery and pub in the nearby village of Donaghmore and he was sent to help them out. When Mr. Fogarty was fifteen his aunt asked a local carpenter, Michael Fitzpatrick of Grantstown, to take him on as an apprentice. Mr. Fogarty went to live with Michael and his wife for the next five years and served his time there. A contract was drawn up with a solicitor and when his apprenticeship was completed, a document was drawn up to declare that he was now a qualified carpenter, as was the practice of the time. Mr. Fogarty did some work in the local area before moving to Dublin and where he got a job with T and J Macken of Dun Laoghaire. He spent most of his working life with this company.

His most vivid memory of work is building the old Nurses Home for the Mater Hospital in the early 1950s. It was demolished to make way for the new Mater extension on North Circular Road over a decade ago.

In the early 1950s, Mr. Fogarty joined a co-op of 24 men, who built their own houses in Finglas West. They were mostly tradesmen and they built the houses on weekends and in the evenings after work. This house on Cardiffcastle Road became his family home, where he lived for over sixty years.

Mr. Fogarty is a lifelong GAA fan and still enjoys matches on TV. He is particularly interested in Tipperary where his father’s people hailed from. 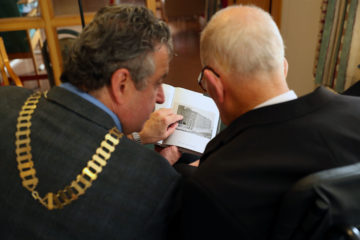 “I am delighted to be a part of Mr. Fogarty’s centenary celebrations today. The Irish construction industry has been built on the efforts of craftsmen like Paul Fogarty, who’s passion for excellence, for creating something from nothing and improving the world around us has been a lifelong affair. I am honoured to be here to wish him a very happy 100th birthday and pay tribute to his contribution to our industry throughout his life.”