in News in Pages in Events in Reports in Services in Webinars in Downloads in Associations
Home / News / CIF Blog: 2018 Housing Forecast and Budget 2019 Recommendation

There is no doubting that residential construction is currently in an expansionary phase. However, considering new dwelling completion data published by the CSO in June 2018, the CIF has now revised its forecast for the total number of new units to be completed in 2018.

The National Planning Framework’s National Policy Objective 32 targets the delivery of 550,000 additional households to 2040. A ‘Housing Need Demand Assessment’ will be undertaken for each local authority area to correlate and accurately align future housing requirements. Increasing urbanisation will also see the RMI market grow. The key drivers of the RMI market include the demand for energy efficiency in homes and increasing modification of use.

Leading indicators help to forecast output levels in the sector and the new CSO completion data shows greater levels of convergence with the commencement data. According to the CSO’s new completion data, new completions increased by +45 per cent in 2017 to 14,446 new units.

“The CSO’s New Dwelling Completions series for 2017 shows that the number of new dwellings was 4,825 below the number of ESB connections published by DHPLG. 57% of the difference is accounted for by reconnections, 23% by previously completed dwellings in unfinished housing developments and 20% by non-dwelling connections. Figures produced by others based on the Building Energy Rating (BER) data sets were acknowledged to underestimate the count as some self-build one-off houses do not get BERs.”

While the new completion data points to an even greater level of supply constraint in the market at present, other leading indicators such as planning permissions show positive intended increases in future supply. In the first quarter of 2018, planning permissions were granted for 8,405 dwelling units, compared with 4,650 units for the same period in 2017, an increase of 80.8 per cent. Quarter 1 2018 also saw the first permissions granted by An Bord Pleanála through Strategic Housing Development Applications, which accounted for 62 per cent of the quarterly increase in dwelling units. 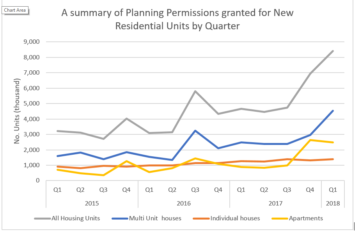 In summary, the leading indicators available to date show that:

The 3,256 residential units completed during the first 3 months of 2018 can be broken down by type as follows: 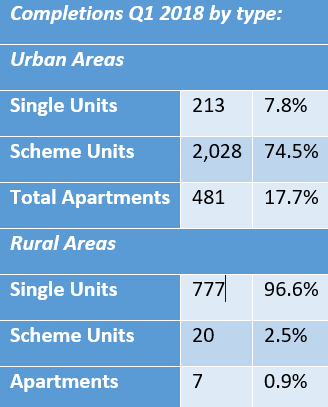 The construction industry is making several recommendations in its Budget 2019 submission relating to housing, for example:

The CIF Budgetary recommendations are reasonable and are intended to maintain the current expansionary phase in the residential construction sector so that the targets set out in the National Planning Framework, ‘Project Ireland 2040’, are both feasible and deliverable.