Bennett Construction’s Royal College of Surgeons educational hub was chosen as the Public Choice for ‘Building of the Year 2018’ in the RIAI Irish Architectural Awards. 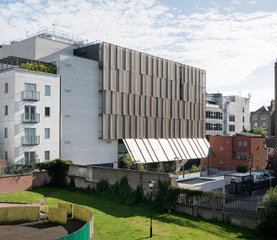 The new academic and educational hub for the Royal College of Surgeons Ireland at No 26 York Street, Dublin is a highly complex mix of spaces on a compact urban brownfield site, which includes advanced simulated environments for clinical and surgical training as well as a new library, auditorium and sports facility. The client brief for the redevelopment of the building called for the structure to be flexible and adaptable and constructed in materials of high quality.

Bennett Construction Limited (BCL) has a strong track record in the delivery of projects in city centre locations and was appointed as the Assigned Builder and Project Supervisor for the Construction Stage (PSCS) on the development following a single stage tendering process. BCL then appointed a strong, dedicated team to deliver the project. BCL is accredited to ISO 9001, 14001 and OHSAS 18001 and these operational systems were put in place to manage the project.

The project featured in an RTE documentary, ‘Dermot Bannon & The Big Build’, which was first broadcast in October 2017. 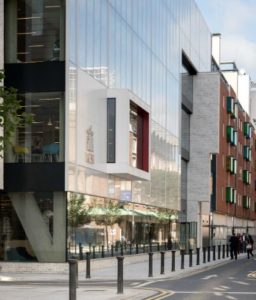 The gross floor area is approximately 12,000 sq m and was constructed primarily of an in-situ concrete frame with structural steel elements incorporated from basement minus four (B-4) to the fifth floor. The building comprises a state of the art surgical and clinical training suite containing a flexible wet lab, mock operating theatre, clinical training wards, standardised patients’ rooms and task training rooms. A simulation centre is laid out over three floors of the 10-storey building, where students have access to a surgical and training suite with clinical skills labs, the mock operating theatre and clinical training wards.

To meet the brief, the building included a 540-seat auditorium, a library spanning three floors with 500 study spaces, a sports hall and fitness suite. Construction started in 2014 and was completed in mid-2017. The site environs adjacent to St Stephens Green encountered traffic restrictions in terms of routes available and the management and coordination of over 300 workers on site during the peak. The main vehicular access to the site was via Cuffe Street – a mainly residential street. BCL utilised part of the existing car park as an accommodation and compound area. Part of the work scope included upgrades along both sides of York Street with phased path closures to accommodate the works. BCL used a dedicated logistical team to ensure that deliveries and removals were controlled, keeping local residents informed of activities at all times. There were many logistical challenges,” says William McLaughlin, Project Manager, BCL. “It was a city centre site that’s not designed for construction traffic, but our dedicated logistics manager kept things moving.”

The original basement box footprint had sat idle for a number of years and was to form the basis of the new development. The basement was extended laterally by over 10 metres, and the existing intermediate floorplates that were propping the east wall were removed to facilitate reconfigured stacked, double-height spaces. BCL placed a 20-tonne mobile crane in the basement until such time as they could create a suitable base for the tower crane. The base of this crane was below the attenuation tank which was constructed below the basement -4 level. Full depth concrete secant piles were planned to bore through the overburden and rock to approximately 1.5m below formation level.

Significant temporary works and careful sequencing with permanent works were required to construct the basement extension and alterations.

There were a number of innovative solutions in the structural design of the building, particularly large span areas at basement levels. The auditorium spanned over the sports hall of approximately 18.5m. A structural BIM model was used for clash avoidance and to allow the construction team to understand the complete design with 3D visualisation. Having a full-size sports hall at -4 level with a 540-seat auditorium overhead presented design and construction challenges. The challenge was to devise a long-span structure to bridge this space and support vibration-sensitive accommodation above. The designed solution was one of steel and decking above the auditorium, which needed to be placed before the upper concrete frame was in place. Considerable back propping was required to support the auditorium steel in its temporary state until the structure acted as a whole.

The strict planning limit on building and parapet height limited the floor depth available to accommodate both structure and extensive mechanical/ electrical servicing to mixed-use spaces. A further complication was the projection of the basement box under the York Street footpath line and the façade overhanging by approximately 1.4m. This prohibited a direct line of vertical support for the structural transfer of loads. The solution devised by the team was a storey-height funicular transfer structure, involving the interaction of ground floor, first floor and raking columns that would reduce superstructure span from 17m down to a more manageable 12.5m span. The resulting 2.25m side spans would be used for both service distribution and to provide a natural corridor space to the central facilities. The raking columns resulting from the design solution thus became architectural features.

External finishing is a mix of brick, curtain walling and brise soleil. Building fabric U-values exceeded Building Regulation, requirements. A pattern of ceramic fritting on the glass improves the shading coefficient of the glazing, reducing solar heat gain and hence air-conditioning load. A central Building Management System (BMS), with metering for all individual accommodation spaces to monitor and optimise energy use, was installed. On the south facing elevation, the high-performance glazed façade incorporates an outer layer of perforated anodised aluminium panels, reducing glare in the tutorial and library staff areas.

“Given the range of design uses within the building, the finishes provided for a complex and varied palette of materials, evident from the sports environs, through the auditorium and into the clinical areas. In effect, there were a number of building types incorporated within the one building,” says William McLaughlin. Internal finishes comprise high-spec fit-out, including floor, wall and ceiling finishes. The building showcases exposed concrete in various finishes throughout. Terrazzo is common to circulation spaces, tying the floors together and drawing light deep into the plan.

The building accommodates hugely advanced teaching technology – simulation, recording and playback – a new innovative curriculum. This technology is designed into the fabric of the building. Due to the RCSI’s international importance, the LEED method of assessment was chosen to provide a framework for the incorporation of sustainable design features into the project. The building has achieved a LEED GOLD certification.

Number 26 York Street has won a number of awards including ‘Best Education/ Healthcare Project’ at the ICE Awards. It also won the ‘Public Choice’ category at the RIAI Irish Architecture Awards 2018 and the ‘Building Category’ at the Irish Concrete Awards 2018.