The South Eastern Branch of the CIF held its annual dinner in the Tower Hotel on Friday the 15th of February. Executive, CIF Southern Region, Ronan O’Brien reports. 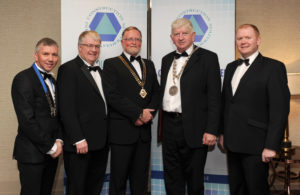 Speaking at the event, Waterford CEO, Michael Walsh spoke of the significant investments that have been happening in Waterford with nearly €500m invested in the county over the past four years.

“Under the Governments ‘National Planning Framework ‘(NPF) Waterford is designated as an urban centre for expansion, meaning the county will get extra attention when it comes to infrastructure investment. This could see the population of Waterford growing from 50,000 to 80,000 people by 2040.”

Pat Lucey, called on Government to supply the necessary capital expenditure that is required for the new bridge across the Suir.

“This bridge will facilitate the North Quays development, which could see another €500m being invested in the county.”

The CIF president also said he looked forward to the completion of the New Ross and Enniscorthy by-passes later this year.

These will provide further connectivity in the south-east and help create a more cohesive south-east region with a superb motorway network running north and east. Following Brexit, if it does occur, the south-east will have a unique opportunity with both Rosslare and Waterford Ports, two of our closest ports to continental Europe, with a superb road network connecting these ports to the national roads and the rest of the country. There is a unique opportunity for the region to capitalise on its existing infrastructure and the infrastructure that is about to be completed so that we can better utilise the south east’s relatively close proximity to the European markets.”

“If this comes to pass, this year the construction industry will represent over 8.5% of GNP,” John O’Shaughnessy said. “There is still large scope to grow however as a growing economy needs construction delivering 12% of GNP. 150,000 are employed in the industry, with 10% of these employed in the South East, highlighting the importance of the industry to the region.  18,000 construction jobs were added in 2018 alone, the fastest increase in employment from any other sector in the Irish economy.”

The South East Branch Dinner was sponsored by Roadstone and Xtratherm.