in News in Pages in Events in Reports in Services in Webinars in Downloads in Associations
Home / News / ﻿Construction industry sees delays, cost increases and skills shortages as key Brexit impacts 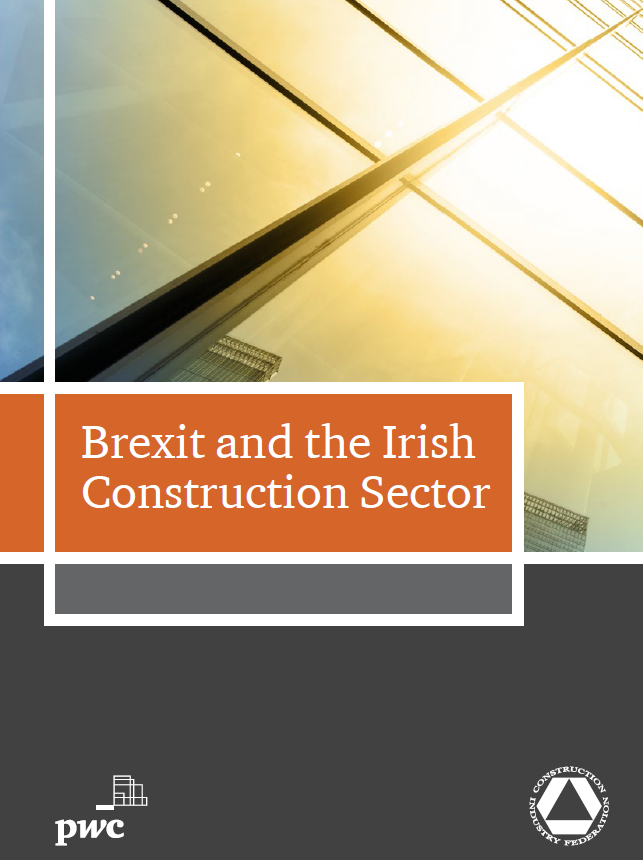 The Irish construction industry is struggling to plan for Brexit and resultant delays in housing and infrastructure delivery over the next decade a survey carried out by PWC for the Construction Industry has found.

The Construction Industry Federation and PwC Brexit Survey of the member base of Ireland’s construction industry on the state of readiness and the likely impacts of Brexit, found that the majority of companies believe Brexit will have a negative impact on their businesses.  The survey found that more review of contracts and greater engagement with suppliers and subcontractors is needed as any Brexit scenario is likely to result in increased costs or delays.

Struggling to plan for the effects of Brexit

72% of respondents stated that they had not undertaken any form of Brexit impact assessment or ‘Day 1’ preparation plan.   This will likely prove costly for a sector that relies heavily on advanced planning, preparing and designing even before activity begins.

Speaking about the survey findings, Tom Parlon, Director General, CIF, said: “This survey provides evidence that construction companies, like other sectors, are struggling to plan for Brexit.  Many companies were already struggling with increasing input and labour costs with minimal cost recovery and Brexit, if no plans are in place, will add to the costs.  Delays in the delivery of materials also have the potential to lead to penalties and additional costs that contractors and their subcontractors could struggle to address.  With housebuilding so tenuous outside the Greater Dublin Area, even minimal Brexit-driven increases could be the difference between securing development finance or otherwise.”

The likely rising cost of raw materials (80%) is seen by far as the greatest concern as a result of Brexit.  For example, almost half (47%) of respondents are of the view the potential additional cost of doing business for their organisation as a result of a no-deal Brexit will be between 5 and 10%.  A further 13% say it will be greater than 10%.  Other concerns are sub-contractor and supply chain difficulties (45%) and loss of confidence/competitiveness (40%) in our domestic economy.  Over a quarter (28%) are concerned about currency and project pricing on ability to tender for projects.

Customs compliance will likely drive incremental costs for businesses as they seek to, firstly, understand this new regulatory and compliance environment and, secondly, comply with the additional customs requirements both on the Irish and UK sides of the border.   It is clear that the industry is going to need significant support in this area with 72% of respondents indicating that they have either limited or no experience of the customs requirements relating to the importation of goods/materials from outside of the EU.  A further 57% have not considered the impact of additional custom duties and administrative requirements might have on their businesses such as the necessity to submit custom declarations, custom compliance costs etc.

Over half (52%) have not engaged with suppliers and subcontractors to determine where they are sourcing their products and their Brexit exposure.   With Irish construction businesses sourcing a significant amount of materials from the UK, understanding what the likely increase in costs and associated tariffs might be post Brexit will be key as businesses look to price jobs and contracts.  Delays at borders may also be an issue with 79% of respondents being of the view that our ports and airports will not be ready for Brexit on 1 April 2019.

Colm O’Callaghan, Tax Partner, PwC Entrepreneurial & Private Business, said: “The survey suggests that there has been limited review of contracts and engagement with suppliers and subcontractors to understand their exposure to Brexit.  Brexit-related clauses have generally not featured in contracts in the Irish construction sector.  This will result in even greater uncertainty post-Brexit as contractors, sub-contractors, suppliers and customers struggle to understand who is responsible for customs related cost over-runs, supply chain delays, knock-on project delivery disruption and any potential regulatory divergence issues on raw materials.”

Reviewing the labour force and ensuring that employees of various nationalities can continue to travel to and from the UK, as required for various projects, should be a priority.  A quarter (25%) of respondents are concerned about the free movement of people to and from the UK as a result of Brexit.

A big challenge facing the industry is access to the necessary skills with 23% fearing the ability to source required talent. Increased wage demands are also a major concern for nearly a fifth (17%) of respondents.

The survey highlights that Brexit is adding to the current skills challenge facing the construction industry.  Recently, people from abroad have helped bridge the skills gap to support the current level of activity in the industry.  A reduction, however limited, will cause a huge strain in an industry with a decade-long pipeline of activity.

Colm O’Callaghan commented: “It is vital that construction firms actively plan for all Brexit scenarios including a no-deal outcome.  This involves actively reviewing contracts, engaging with suppliers and subcontractors, assessing potential supply chain and people issues as well as equipping themselves about customs requirements to establish where the pressure points may be. Doing nothing is not an option.”

40% of respondents said that the delivery of the National Development Plan 2018-2027 is a key action Government could take to give the industry certainty in the light of Brexit.  Survey respondents also called for increased access to funding (22%).

Tom Parlon said: “The CIF has long advised its members to take steps to prepare as much as possible for a range of post-Brexit scenarios.  The industry is a key driver of Irish economic growth and is now emerging from a decade long of underinvestment.  Despite Brexit uncertainties, the industry will continue to be central to Ireland’s economy in the post-Brexit period.  Policy makers should calibrate further support towards the industry, particularly SMEs, to insulate the economy from the worst impacts of Brexit.”

The survey was conducted in December 2018 and January 2019 amongst the members of the Construction Industry Federation (CIF) canvassing views of construction industry leaders on the state of readiness and the likely impacts of Brexit and having 106 responses.

5 must do actions that construction companies of all sizes should take now: