A groundworker was hand-digging a trial hole to locate a known ESB cable and other utilities in the footpath when the shovel he was using encountered an unmarked, uncharted, pot ended cable. The strike resulted in a minor flash and some smoke was also emitted. Luckily there was no injury to the operative undertaking the ground works.

The operative had thought that that bit of concrete over the cable was just lying in the ground as there was no signal being emitted from the Cable Avoidance Tool (CAT) when it was used in the direction of the blue arrow, only from the red. It was during the action of attempting to prise this piece of concrete out that the pot-ended cable cover must have ruptured.

The groundworkers had scanned the ground using the CAT and it had picked up the main cable; this was the only cable that was marked on the ESB drawing. All other services were laid in the direction of the blue arrow and the pot-ended cable was running at right angle to these. Sand or marker tape was not detected.

Other controls utilised included: (a) utility drawings, (b) a permit to dig, (c) an approved Risk Assessment Method Statement (RAMS) for the activity, (d) CSCS-trained LUGS operative, and (e) provision of a fully calibrated CAT. 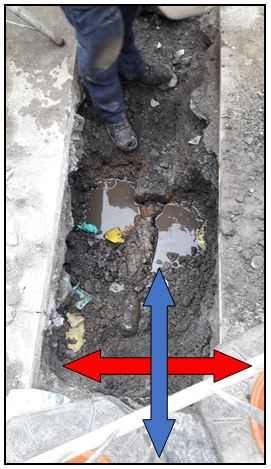 The ESB personnel who came to repair the cable stated that it was probably an old service to a street light that was removed some time in the past. The cable was uncharted on the utility drawings and no indicator sand or tape was used.

Pot ended cables are perhaps the most dangerous and difficult cable to locate and several accidents have occurred because excavators have damaged them.

Locating using passive signals alone (using power frequency and radio frequency modes) can only find cables carrying current and/or reradiating radio signals. Generally, pot ended cables cannot be located with the universal CAT because pot ends do not carry current even though they are under voltage, so they do not radiate any power frequencies. To be detectable in Radio Frequency, the cable has to be sufficiently long to have a radio frequency current flowing through it, but because pot ends tend to be short length and are ungrounded there is no current path for the RF signal so with a conventional passive locating procedure they are “invisible”.